Many members have had times when their plants don't seem to be responding adequetly. Perhaps it is an imbalance in pH and nutrients. Or pests and fungi. While not as prevalent for me (I do not touch outside clones), it has been coming into my view for awhile now. Confirming with my braddahs in Cali and Oregon, it's happening more than you think, with elite clones here on the West Coast. This situation appears to be endemic to parts of EU as well.

"Over time, however, growers may notice changes in their grows: stunted growth, smaller flowers, yellowed leaves, limited cannabinoid and terpene production. Is this phenomenon – commonly referred to as ‘dudding’ – the sign of overstressed plants or the harbinger of something much worse?"

These days, it would be prudent to be wary of clones having something you can't see, and quarantining plants before introduction into your space.
Or better yet, starting with fresh seed every season.
Anyway, here's a few articles I thought might add to the conversation.

Growers around Californa are facing a virus problem, and one of California’s oldest cannabis nurseries, Dark Heart Nursery (DHN), has the antidote. With the help of Dr. Jeremy Warren, DHN discovered the HpLVd virus that has been plaguing growers for the past several years. Now, it’s time to...

cannabisaficionado.com
"These unusual symptoms were recorded in 2015, when Dr. Rick Crum found that as much as 35 percent of nursery samples demonstrated these symptoms, along with stunted growth. At the time, the cause of these symptoms was identified as “punitive cannabis infective agent” (PCIA), a term used to describe the unexplainable loss of vitality among cannabis plants."

The Threat of Viral Cannabis Diseases

Growers worldwide are seeing Cannabis disease symptoms with unknown causes among their crops. Here’s what we know about potential causes, detection and what you can do to stop viral spread.

www.cannabisbusinesstimes.com
"We knew that because lost vigor was appearing in asexually multiplied serial cuttings the problem could not be explained by “genetic drift,” which is a shift in the frequency of genes within a small sexually reproducing population. Growers wondered what the causes might be, and even addressed the possibility that simply making serial cuttings might result in diminished vigor."

"Unsanitary cuttings are the main root of Cannabis diseases, and rather than trying to clean an infected clone, growers can simply sow seeds. Seed and pollen transmissions of viruses and viroids have been shown for several crops but are unconfirmed in Cannabis. Traditional seed propagation interrupts a pathogen’s life cycle, allowing a fresh start each year. Seeds provide the best chance of procuring clean plants and establishing a new clone. Who knows? You might even discover the next OG Kush!"

"As cannabis is increasingly commercialized, disease control will become the responsibility of licensed and certified nurseries that will preserve and distribute clean stock, like all clonally based commercial agriculture from potatoes to berries." 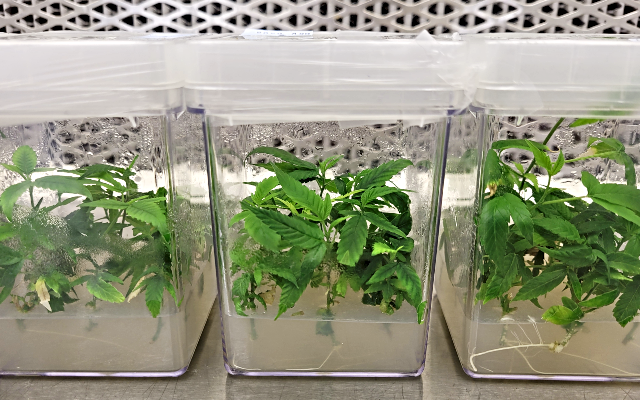 Hop Latent Viroid (HLVd) is one of the biggest threats to the cannabis industry. The disease is difficult to identify and can rapidly spread undetected throughout a facility.

www.marijuanatimes.org
"Hop Latent Viroid (HLVd) is one of the biggest threats to the cannabis industry. The disease is difficult to identify and can rapidly spread undetected throughout a facility. According to MJBizDaily, California operators have lost 10-30% of their crop from the disease, and internal data shows infected plants can also suffer up to a 35% loss in cannabinoid content such as THC, and up to 70% reduction in yield."

there’s a video on YouTube somewhere with SB and he goes to the flowery fields clone nursery in Vienna, I think. They take tons of clones and show how they keep them clean.
SB shakes the dudes hand and tells him that’s how you run a nursery.
Some of those articles are written by the companies that want to convince people their clones need to be “cleaned” it says that these issues can be outgrown by taking healthy cuts of an infected plant. SB has preached that for years to put a mother plant outside to regenerate healthy cuts.
N

Among identifying HpLVd, Dark Horse Nursery has developed a functioning “clean process” under the guidance of Research Manager Will Roberts. This process, however, is currently patent-pending, giving DHN ownership over the eradication processes.
Click to expand...

The last article was written by rob clark for bioagwhatevercompany

3rd article said " proprietary process" - that's when I thought of Dave Watson. proprietary, sole ownership, exclusive patent - all similar words relating to cannabis make me think of him! Dunno why.

ive also never heard of it, till now. thanks for putting this up Mu

quinxstar said:
this kind of virus spreads because of the genetic uniformity of plants
as plants are genetically close the virus is transmitted quickly
Click to expand...

So it's the covid for plants?

High-mish said:
So it's the covid for plants?
Click to expand...

no because the covid is a fake

Staff member
Not like the flu. More like herpes or HIV. Spread by specific means. In the case of HLVd, it appears that it is primarily passed on by diseased pollen and/or using an unsanitary tool lol.

Staff member
A simple solution- never bring the ho home haha; avoid unknowns (outside clones) and if found in the situation (taking cuts), heed the recommended precautions by making sure of a sterile environment.

i`m so bad with working sterile seems ive have to adjust my ways and up my games. Should improve my succes rate taking clones aswell

Staff member
Ha, case in point. I forgot to use bleach/H2O2 for my latest germination; got some damping off on the Northern Widow/Mohan Ram seeds
IMO, critical ingredients in everyone's arsenal should include alcohol, hydrogen peroxide, bleach.