So, I do not cheap out on the beer I use in cooking. well, I do, but not in the way you would think. my best friend works at the back office of a local grocery store; with multipel locations, and the staff at the one by me, DO NOT GIVE A FUCK. they took DELERIUM TREMENS, a world winning beer that sells for like 8 dollars a bottle, and put it at a dollar a bottle to make room for budweiser. last year.

Guess who bought all of them, then called his friend to tell his boss how much his employees hate him? me. I have 20 bottles left. as I do not drink, all my beer marinated foods have become exquisite.
Click to expand...

That's amazing! I lived in Ghent during my early 20's and very close to the Overpoortstraat where it's partying 24/7, bars almost don't close in that street. There's this bar which is the main "Delirium Tremens" bar in Ghent. The beer has a pink elephant as symbol. It's said that when you get into a state of 'delirium tremens' by drinking too much of this beer, you'll start seeing pink elephants.

Gonna quit smoking these heavy sativas. Never thought this day would come, but I am not into it anymore.
It is too present for a brief time and then it balances out to a pleasant high, while at first it comes on too strong.
Hear me nagging about “too strong” lol. But vaping hybirds between indica and sativa is more suitable, was able to perform beyond myself.
If I had no tolerance my heartbeat would be going up. I might even switch to those cbd strains with a 1 to 1 ratio.

Cannalicous said:
I might even switch to those cbd strains with a 1 to 1 ratio.
Click to expand...

Iam leaning towards this some 2 years, and finding it usefull

Yeah CBD is good stuff. I get the CBD crumble with added cannabis derived terps. I feel like it's a clearer more functional high even when mixing with higher THC content flower in a vape. It adds a bit of flavour while vaping so if you are getting bored with a certain batch of flower it can spice it up. I find my anxiety symptoms are less noticeable if I mix both together in a dynavap bowl.
Peace all.

So i thought id drop some shishkaberry from barneys farm. This is a good pheno but not my favourite.
Smells of rotting red berries and even a slight hint of sweet red wine. Late afternoon seems to go well with this one, not completely narcotic in effect. unless you over indulge, then it'll stake you down.

Photos taken with natural light and no flash.
Peace all.

yes they are they come through at the rite time its s nice! good looking bud.

I was talking to my good friend, Artist and Autoflower Girl, Cat Seyler, this morning. I did post up a picture of her in some thread. As an artist she seemed to think that 1,000 percent of pot pictures are simply trichome laden buds. That's it. No originality, no photographic composition, no thought process other than 'my trichomes are bigger than your trichomes'! She got a point. She wondered if any of us picture takers ever had an original thought about pictures or maybe we were just too stoned to think about it. Speaking only for myself, yes, I am usually too stoned too think about it and no, I've never had a original thought in my life. So for Cat's sake, I thought I'd try to take a couple of original artsy-fartsy pictures of trichome laden buds! I think I will stick with 'my trichomes are bigger than your trichomes' pictures! Much easier. They're there and I don't have to think about nothing. Cuz I'm too stoned!

I will smoke this today, after I pick all that artsy stuff out! Weird how the background is kinda like out of focus diamonds too! Just odd luck, not an original thought process!

Herkimer Diamonds are a double-terminated quartz crystal. The "diamond" in their name is due to both their clarity and natural faceting - crystals possess double termination points and 18 total faces (six on each point, six around the center). They can be found in outcrops of dolomite, about an hour from my house. They are thought to be about 500 million years old! If you go, bring a BFH!!! 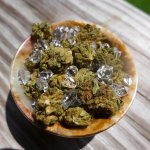 Ok. that's enough artsy-fartsy stuff for one day! I'm getting a headhache from all this original thinking nonsense! Time to go smoke this! @Kryppler, where you at?

Thanks, PCaddict! Kinda like the pics a bit myself. Not sure if it's worth the headache though!

8-2-2021
Forbidden Fruit x A5bx1
This Pheno has an uplifting head rush at first, it transitions into a really nice body stone but doesn’t weigh you down at all. Taste is a piney berry, I’m terrible at describing flavor but that’s what im getting right now. I like this one a lot! 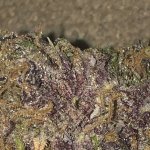 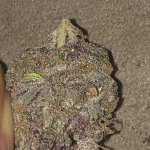 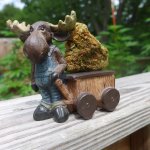 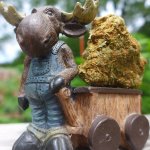 ...remember to smoke it! 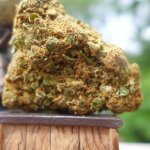 Wait! Before I fire this up, I got one question. Where's my good friend, @Kryppler at? I'm gonna need some help with this!

Ive been down on the farm, lately LB. Cant wait for the day Im there to help distract moose mcgilllycuddy while you roll one up for us, brother! Saw some of that resinated master kush skunk and wanted to sample some of that too. Should have called that weed -grasshopper mouth. Haha. I woke up the other morning and took out some killer angels breath and just pondered - man, not too long ago i was scraping black shit out of a pipe during hard times and its like im totally willie nelson now. Heres some angels breath that ill roast in your honor, LB -always a bomb of dankness on the tongue everytime i need you! Rock on brothers and sisters

Would love to try that, Byorn! You going to be home for a bit?

Nevermind, Byorn! Thank you for the kind offer! Heading over to Hootigh's for a smoke!