After the harvest, of course. Today, I am getting ready to fire up some Afgooey. Rumor has it Afgooey was created in the 1980's from Maui Haze and a Afghani landrace. I wasn't there so I can't vouch for that. I can vouch for its potency and earthy pine smell and taste with hints of wood and sweetness. Very potent smell so the smallest bud will stink up your entire house if not put in an airtight container. Putting it in a baggie at the bottom of your underwear drawer won't cut it. Your house will smell of Afgooey! If not careful with it, it's 'lights out' before you know what hit you. This make it a good choice for chronic pain or insomnia. Or both!

Today's choice of smoke is Trainwreck as I want to get 'wrecked! Reason: Today is my birthday! YAY! I do have to work tonight but I love my job! It's ok to show up 'wrecked and stay that way the entire shift! Tonight, I will be working with a Grateful Dead cover band and 'Eyes Of The World' will be a great birthday song! Did I mention that I love my job? Forget who I am working with tomorrow night but it is another 'jam band' so being high at work is encouraged! haha Can't wait to get to work!

From Leafly: "Trainwreck is a mind-bending, potent sativa with effects that hit like a freight train. Mexican and Thai sativas were bred with Afghani indicas to produce this Northern California staple, passing on a sweet lemon and spicy pine aroma. Trainwreck begins its speedy hurtle through the mind with a surge of euphoria, awakening creativity and happiness. Migraines, pain, and arthritis are mowed down by Trainwreck’s high-THC content, and many patients also use it for relief of anxiety, ADD/ADHD, and PTSD. Trainwreck flowers tend to finish early when growing outdoors, while indoor gardens are ready for harvest after 8 weeks." 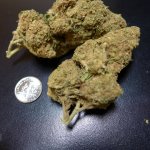 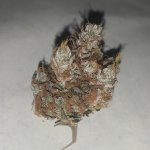 If looks like this year I get my kicks in year 66! Of course, it's not like us old pharts haven't been kickin' it since....well, since the dinosuars!

Chem 91? Is that a bud from that beautiful Christmas tree plant you are growing? Let us know about it! Looks absolutely loaded with trichomes!

First one is Galiano (nl5xhaze) from broken coast
both trash but at least the rasta's holy grail from the corner rings the bell for more than 10 minutes, albeit not very hard...

Seed Collector - I'd smoke that too! haha

When a room of ugly people call you ugly just means you're beautiful
Looks to me, mean very little. Except maybe as a red flag of it's degenerate genetic makeup and placebo effect.

Some bud I harvested recently. I'm not sure what the genetics are though. Stinks like cat piss.

"I'm not sure what the genetics are though. Stinks like cat piss."

longball said:
"I'm not sure what the genetics are though. Stinks like cat piss."

The grow before this i run La Nina and also had several pounds of outdoor MNS strains so I didn't take cuts because I had planned on going to visit family interstate but Covid19 fucked my plans and had to seek a clone so I didn't have to do a selection and pump out another round of flowers. I went to a friend place that doesn't smoke or grow and they randomly asked if I wanted a cutting, so I took it. I was told it was Blueberry cheese but the strong stench of cat piss and a plant that filled my entire tent and incense scented smoke tells me otherwise. It's great stuff whatever it is. The first non MNS strain I've grown in over 10yrs.

Today, I am getting ready to fire up some Jack Herer with the Racing Fuel pheno. No need to say much about it here as there is a thread about it. The pipe? If pipes could talk! While not a looker, it has held up well over the decades. It was given to me by a special friend back in the mid-seventies! After spending a few months in Mexico, he returned with 2 gifts for me. The pipe, and a kilo of Oaxacan Gold to fill it with. Special friend, indeed!

I always prefered the Oaxacan to Acapulco. I am not so good at describing these things but here is what Nevil had to say about Oaxacan: "The Oaxacan, in my memory, was much more complex. It was fruity, but had tang, with a full bodied sweetness, more fruit salad than just fruit.. The smell had the promise of leading to something delicious and it did. It was strong, yet it had balance. If the Nepalese was playing high C, the Oaxacan was playing a chord with resonance. It was a comfortable feeling, high yet grounded, profound and content. I am reminded more of a beach party, a celebration of life, (Shakira shaking her arse comes to mind). It had the well rounded high of an Indica /Sativas hybrid, without being one. This Mexican Sativa was no accident of nature. I'm sure it was bred by a Master with a love for life. N". I agree.

Over the next 40+ years, my friend traveled the world, gone for months at a time. When he returned, he always had a gift for me, often wrapped in a material or cloth that I was not familiar with. Many times with a stamp or letters on it in a language I did not understand, and always measured by the kilo. Like a child, I was always excited about getting a gift, and putting it in the pipe to try it! He never said anything about his trips, no pictures, no mention of sightseeing tours, not even what the gift was. He did generally mention the country that he had been to, and the women, but other than that, he didn't tell, I didn't ask.

Now that I have joined this site, I am trying to put things together. Well, what I can remember anyway. It's all kinda 'hazey'. Some things are easy to guess from the clues. Lebanon, reddish, hashish, a cotton linen bag with a drawstring, a stamp on it with Arabic letters. Lebanese Red Hash! Laos? Not a clue. Columbia? Reddish pot? Don't really know. Hawaii? A paint can? Maui Wowie! Cambodian? Red. Yummy. Awesome. What was it? Jamaica? Something different every time. Had a name once but forgot it. If pipes could talk! haha

Sadly, my friend lost his battle with cancer last year at the tender young age of 63!

I will put this pipe to good use today, Jim. This bud's for you! 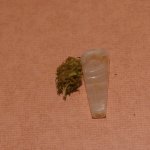 La Niña is what I’ve been smoking lately.

"La Niña is what I’ve been smoking lately."

Nice and sparkly! I like sparkly things! Did you grow that indoors or outdoors?

longball said:
"La Niña is what I’ve been smoking lately."

Nice and sparkly! I like sparkly things! Did you grow that indoors or outdoors?

Thanks Longball! Grown indoor 11/13 chopped at 90 days of flower.

Some bandaid x a5 and very nice it is.

bizarro world I know, homegrown beats the dollar store every time hands down no question -.-