I think I’m skipping the 48 hours of darkness before chopping this time.. these gals are probably getting chopped tomorrow AM!
Last edited: Nov 18, 2021

SSH Plant 10 Day 59 of Flower Macro
Lots of amber trichomes.. should have chopped already! That purple though

Cool Pistil Pic below - I think plant 10 but not sure

Staff member
Done to perfection. Nice grow brah and fasten your seatbelts, you're in for a very enjoyable ride! What will you treat us with next?

musashi said:
Done to perfection. Nice grow brah and fasten your seatbelts, you're in for a very enjoyable ride! What will you treat us with next?

Thanks Mu, means a lot coming from a pro like yourself!!

NEXT!! - I’m thinking it’d be more fun sampling a bunch of strains instead of more thoroughly searching individual strains. I’ll be aiming to end up with 6-8 girls (shorter veg, smaller pots).

Will likely be looking to pop something like the following:

Both Plant 8 and 10 were at the back of my tent. It’s been real difficult to get close to them, the way the area is set up. After moving Plant 8 to the front and taking a closer look the majority of her trichomes are still clear. She will not be chopped today after all!

After getting to handle and take a long, close look at Plant 10 I’m already blown away! She hands down appears to be the best pheno of the pack.. thus far.

Of course, effect is my most prioritized factor so we will have to wait for the smoke reports to crown her Champion.

BUT… she has shown vigorous growth in veg and flower. Handled most of the torture I’ve put her through with grace, and recovered from it well and quickly. She has BIG, DENSE, BEAUTIFUL buds that frosted up nice in the final week (without any added UVB or any other tricks than low humidity). Even the lowest buds on her are big.. like really impressing me big, with a beautiful shape to them as well. The buds have a foxtail look to them that I think is genetic and I like it! Oh and she finished flowering in under 8.5 weeks!! Looking at the trichomes I probably should have harvested her a few days earlier than I did.

She was by far the easiest of the plants to clone. She has by far the most intense smell of any SSH plant (other than MAYBE the male, “Plant 1” and they smelt nearly identical). I will break down the smells once she’s in jars and also ask a few friends to help that are better at this than me.

It’s crystal clear that the pollination I gave her took really well. The branch I pollinated is LOADED with seeds. One seed fell off while I was harvesting her and it appears to be fully mature and beautiful, with awesome tiger stripes. The seed is hard when pinched and I’d be surprised if it had any trouble germinating.

Both Plant 10’s leaves and bud have a gorgeous purple hue to them. Had I the temps in the tent drop further at night, I can only imagine how purple she’s be!

So with all that said. If she smokes half as good as I think she will, I’m going to take some more clones off the “Plant 10 Clones” in the 2x4 that I just sent into flower a couple days ago. Yes, I have her genetics somewhat preserved, having mixed her with her male twin, “Plant 1”. BUT.. I can’t see myself letting the 2x4 harvest being the end of her.. at least not yet!!
Last edited: Nov 20, 2021

Week one of flower in the 2x4 is complete. Coming along nicely.

The two “Plant 2” clones on the far right are out growing their sisters.

Plant 8 is getting the chop in a few hours! She has frosted up quite nicely and I’m getting really fruity smells from her that I’m very excited about. I’ll try and remember to snap a photo before getting her up in the dry room.

The 2x4 is coming along nicely. I’ve been brewing a compost tea for the past 36-48ish hours. Hoping to keep them nice and well fed to promote the rapid growth she’s been going through in these first 2 weeks of flower! Top of the canopy is getting pretty light / lime green. I’ve read that’s a common occurrence at this time due to the rapid growth in early flower. I hope what I’ve read is right. I think they look pretty healthy.. thoughts??

Plant 6 and Plant 10 are done drying, been trimmed and are in jars curing! Got a bunch of nice mature seeds from both to keep the genetics alive. I was definitely not careful enough with pollination.. seeds showing up throughout the plants not just selected branches. Will take some pro photos over the next week or so. Beautiful buds and seeds I’m very happy !!

Plant 8 finally got chopped yesterday AM. Very fruity smell to her, very excited to smell and smoke her after a nice cure.

The plants in the 2x4 are thriving, it’s a freaking jungle in there!! The two “Plant 2” clones on the far right are taking off, their sisters can’t keep up! Can’t wait to see the quality of that harvest with no seeds and hopefully far less mistakes than the first run!!

I’m using an electric Sky ES180 V3 for the light in this 2x4 tent. Have the dial up to 7/10 and the plants are tolerating the extra intensity a lot better than the plants were in the 4x4!

Very nice even canopy...Good yield to be expected.
I remember pro dutch growers in the 90's used to say you must keep 50 apex per sqm for optimum yield.
Last edited: Dec 4, 2021

That is some awesome view

I mentioned starting a few girls real late, that I haven’t really shown too much of on here. They’re currently in the 4x4 and finishing up real nicely!! Here’s a couple shots. 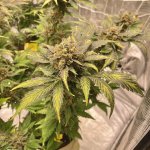 Most Sativa looking pheno to date? 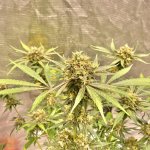 Hanzde said:
nice grow mate do some one know something comparable to GaiaGreen in Europe i looked and no chances only for 300€ a bag thats to much and then i see the prices in us or canada some bugs thats it and here we have this dry fertiliser from Greenhouse seeds thats cost a fortune i have find some really cheap products for Trees also organic and Cheap real cheap 25Kg I don't know from my head but it was cents with a comparable N-P-K ratio but i dont know if its any good
Click to expand...

That may work the npk is most important

Dang TGDE, you are owning that Silver. I have enjoyed your works a lot. Your passion truly shows.
Respect.

Cannalicous said:
Dang TGDE, you are owning that Silver. I have enjoyed your works a lot. Your passion truly shows.
Respect.
Click to expand...

Thank you man! I’ve loved every second. Doing the two tent thing was a little too much for my chaotic life. The final plants in the 4x4 were harvested today. Now that I’m down to just the 2x4 I’ve already felt some stress melt away.

I gave the 2x4 plants a second compost tea earlier this morning. They were looking a little malnourished (fading to light green, little droopy). I probably should have hit them with the second tea a few days ago.

I had read to only give a tea once every two weeks but since I’m only using 2 gallon pots they probably could use slightly more frequent feeds. I checked on the girls about 8 hours post tea and they’re all praying to the lights beautifully.

The second tea was made up of:
5 gallons of dechlorinated water
3 tbs of blackstrap molasses
2 tbs of alfalfa meal
2 tbs of kelp meal
1 tbs of mineralized phosphate (bat guano)

Using two large air stones I let the tea bubble for 36 hours before giving it to the girls.
Last edited: Dec 11, 2021

Later this morning I will FINALLY be taking some pro quality photos of the (FREAKING BEAUTIFUL) buds from Plant 6, Plant 8 and Plant 10.

One plant per day I’ll get photos posted of the bud, the F2 seed and an in depth smoke report! Spoiler alert this strain left me stoopified

Next step for the 2x4. Once the medium dries out Sunday afternoon or Monday AM I’m going to do my final topdressing. Will top dress with 1.0-1.5 tbs of Gia Green 2-8-4 power bloom and a 1/2 cup of worm castings per gallon. This should hopefully lead to a nicer fade despite being a few days late on the final topdressing!
You must log in or register to reply here.
Share:
Facebook Twitter Reddit Pinterest Tumblr WhatsApp Email Link
Top